Today, I’m happy to introduce you to Jesica from Just Smile and Blog. Jesica and I became friends through blogging two years ago.  I hadn’t announce my miscarriage on my blog but somehow she and I got to talking through email. We instantly connected and shared our stories.  She and I both miscarried close to the 12 week mark.  When we became friends we were both having a hard time. I can’t begin to tell you how many emails were exchanged between us.  I can tell you how nice it was to connect with someone who knew EXACTLY how I was feeling.  We both ended up getting pregnant again around the same time, our little ones are just a week apart.  I admire how honest and open she is and am grateful that agreed to share her story here today.

Our journey to parenthood started just like many others.  We had a firm plan in place as to when we would start our family, not wanting to wait too long but wanting a bit of time as just a married couple before we took the plunge.  Then one day (our planned month to start our family) decided now’s the time, let’s throw out the birth control and see what happens, both of us SURE that we would be pregnant in no time.
We were so wrong.
It took 2 years and 2 months from that moment before we would finally welcome a child into our home.
Along the way was a whole lot of not ovulating, a whole lot of timed sex, some fertility drugs, lots of tears, lots of negative pregnancy tests…and one miscarriage.
Here’s our story:
Nine months after our wedding in June of 2010 we decided it was time to make a baby.  A few weeks later I got my period, I felt a tiny pang of disappointment that it didn’t happen the first month but thought for sure that next month would be the month.
That was the last period I had for 4 months.
Do you know what you do when you don’t get your period and you’re trying to have a baby?
That’s right, you take an assload of pregnancy tests.
All negative of course.
Then when that doesn’t work you start taking an assload of ovulation tests.
Those were also all negative.
Months with no period I finally seek out some help from an OB/GYN and after some blood tests and an ultrasound I’m diagnosed with PCOS (Polycystic Ovarian Syndrome) and learn that I am not ovulating.  At all.
Awesome.
I spend the next 6 months doing everything I can to try to ovulate on my own.  I start temping religiously, I see a naturopath, I start acupuncture, I take millions of herbs, I change my diet, start exercising more…all to no avail.  I have 90-100 day cycles, all anovulatory.
Finally after a year of not ovulating I take the plunge and head to the RE (Reproductive Endocrinologist) fully aware that we are leaving the days of getting pregnant on our own behind us and moving on to the drugs of Western medicine.
Enter Clomid.
I was scared to death to take that first pill.  I was pretty broken up about the fact that we were resorting to fertility drugs to try to help us conceive.  But ultimately I was on a very low dose and did not have any adverse reactions to the drugs and I OVULATED.
Woohoo!
We did not conceive our first month of Clomid, but the fact that I ovulated and we actually had the OPPORTUNITY to make a baby that month was AMAZING.
The very next month, lo and behold…our first ever positive pregnancy test.
And that was it, I thought we were done.
When we first started trying we were blissfully unaware of how prevalent miscarriage really is.  The one in four statistic that I know so well now was not something I’d bothered myself with.  Sure I knew a few people who’d had miscarriages but I never dreamed it would happen to me, ESPECIALLY after our struggle to become pregnant in the first place.
I thought for sure that once we FINALLY became pregnant that it would stick.
I was so confident in that pregnancy…I remember boastfully announcing I was 10 weeks pregnant at a dinner with several of my husbands friends and colleagues…as though I was long past the danger zone of the first trimester.
Little did I know that my baby had already died and 2 weeks later I would start bleeding and my world would come crashing down around me.
I made it to 12 weeks.
Twelve weeks is supposed to be the magic number, if you make it to 12 weeks you’re supposed to be SAFE!
We announced on Facebook that we were pregnant at 12 weeks exactly.
And at 12 weeks 1 day I started bleeding.
One trip to the ER and we learn that not only was the baby dead but that he’d been dead since 8w4d, just one day after the last ultrasound I’d had confirming the pregnancy.
We were devastated.  In my mind that was it, we were never going to be able to have children.  Or if we were, it was going to take another year of trying or more miscarriages to get there.

I didn’t know if I had that in me.  I was an emotional wreck.  I was depressed and quickly becoming bitter.

I found it very hard to hear pregnancy announcements or see babies.  I used to love babies and now I shied away from them like they were poisonous to the touch.

I decided to let the miscarriage happen on it’s own and just over a week later I finally passed the embryo and was officially not pregnant once again.
We took a little time to heal, I had my first post miscarriage period (annovulatory of course!) and we were just waiting for one more month to go by, assuming I wouldn’t ovulate because you know…I hadn’t ovulated on my own in 18 months, before we would head back to the RE for another round of Clomid.
But just 8 weeks after the miscarriage we found ourselves staring down the barrel of another positive pregnancy test.
We were pregnant once again.  This time on our own.
Our reaction to this second pregnancy was nothing like the first.  Still healing from losing the first baby we were guarded and cautious and basically scared shitless that this one would go the same way as the first.
But after a very uneventful pregnancy in August of 2012 we welcomed our son into this world.

We’re now at 14 months and I’ve yet to have my first post pregnancy period.  I’m hopeful that it’s because I’m still nursing, but I’m scared it’s because my ovaries are once again covered in cysts and they’re keeping me from ovulating.

Our journey is far from over but with one successful pregnancy under our betls I feel a bit more confident going in for round #2.

For me it was not the infertility itself that was the hardest part of our journey but the miscarriage.
It broke me.
It made me bitter and angry and sad in a way that I’d never experienced before or since.
To this day I have a little pang of jealousy for anyone who’s made it to parenthood without losing a pregnancy.  It’s mean and selfish and horrible and I hate myself every time I think about it.
But I do.
I’d like to say that in the end it was worth it because if I hadn’t had the miscarriage then I wouldn’t have Jett…but I don’t know that I honestly will ever be able to say that.  For me, I still would have rather made the journey sans miscarriage.
There’s a very special place in my heart now for anyone else who’s every experienced a miscarriage and how Leah and I came to know each other.
It’s a very taboo subject for some reason and I’m so glad Leah and so many other bloggers have been open about their experiences.

Infertility and more importantly miscarriage will always be a part of me.  It has shaped me as a parent, for the better I feel as I will never take my child for granted but it has also made me more cynical and bitter as a woman.

I am so very grateful to have this little man in my life but feel the scars of losing our first baby whenever I think about expanding our family.

To anyone experiencing a miscarriage just know you are not alone.  I let my journey become public, albeit unwillingly (announcing a pregnancy at 12 weeks only to lose a pregnancy means you have to sort of UNannounce your pregnancy) and it became my salvation.  SO many people came out of the woodwork to share their own stories of miscarriage and I reached out to the blogging community and found even more women to share my grief with.  One in four pregnancies means your bound to know someone who’s experienced a miscarriage as well and while it doesn’t heal the wound, knowing there are others going through the same thing helps ease the ache.

Thanks again Leah for letting me a part of this amazing series.  Infertility and miscarriage should be talked about not hidden behind closed doors!

Come back next week for Lisa’s story.

If you would like to guest post as a part of this series, I would love to have you! 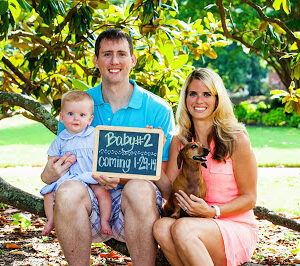 Our Journey to Parenthood- Caroline’s Joureny