I hope you all are ready for week two of Our Journey to Parenthood Series!
Today, Sara from Running From the Law is here to share her story.
I read a post Sara wrote about her journey and knew she would be perfect for this series.
Sara is one of those women who does it all. She’s always out and about with mac, works as a lawyer, takes amazing pictures (and shares tutorials on how to) and posts drool worthy recipes.
Thank you Sara for sharing your story with us.
**I think many women can benefit from reading what she wrote on how to help a friend going through infertility or loss, beautifully written and so so true**

Hi
everyone!  I’m Sara from Running From the Law.
I’m a wife, lawyer, runner and new mama to Baby Mac (16 months
old).  I’ve recently started talking
about my battle with infertility on my blog, so I’m honored to be guest posting
here and I truly hope my story will help someone out there struggling to get
pregnant feel a little less alone.

What is something that helped you get
through the hard times?
My husband was my rock.  I don’t know what I would
have done without him.  He was positive and hopeful and supportive.
He never made me feel pressured to continue or made me feel like I was
disappointing him.  He told me that adoption was an option, if I wanted to
go there.  He joked that if we couldn’t have kids, we’d blow all our money
on elaborate vacations, designer clothes and lobster dinners and make all our
friends with kids insanely jealous with our elaborate lifestyle.
We’d get a boat, we’d get another dog, we’d get a house in
the mountains and one on the beach.  He nearly offered to kidnap a
child for me, a la Raising
Arizona.  None of these things fixed the hole in my heart, but it made
it easier to get though everything knowing that he would always be there and
love me no matter what.

What is one piece of advice you would
give to someone on their own unexpected journey.
At some point in our struggles to get pregnant with Mac I
read an article on infertility that said something along the lines of, “if you
want to be a mother, you will be a mother – you will find a way to make it
happen.”  This really stuck a chord
with me.  We were always open to
the idea of adoption, or surrogacy or doing whatever it took to get a child
into our home.  Of course I wanted
my own children with my husband, but
if that didn’t work, there were other options to exhaust.  I was so focused on “getting pregnant”
that I wasn’t even thinking about the ultimate goal of just “being a mom.”  Maybe we’d do an overseas adoption?  Maybe we’d get an egg donor?  Maybe we’d adopt a 10 year old that’s
never had a real home?  It didn’t
matter how it happened, I knew right then that I’d make it happen and one day I
would be a mom.   That was the goal.  That realization changed
everything.  So, my advice would be
to keep an open mind as to “how you’ll become a parent” and focus on the
ultimate goal of being a mom, not on just getting pregnant.  You’ll get there.

How did it affect your marriage, was
it positive, negative or both?
Definitely both.  On the one hand, it made us so much
stronger as a couple.  Going
through something so personal and emotional like infertility really makes you
appreciate what you have and hang on tightly to those that understand.  It’s a very lonely experience and my
husband was always there for me, making it easier.  He held me when I cried myself to sleep after hearing that a
friend was pregnant.  He held my
hand in the doctor’s office every time we got bad news.  He gave me shots.  He kept me going.  We fought long and hard for what we
wanted, together.  We were a team
and we came out on the other side much stronger.  But, on the other hand, man it was hard while we were in the
thick of it.  Because the
infertility was on my side of the equation, I definitely internalized a lot of
the struggle and felt like it was all my fault.  I constantly wondered if he regretted marrying me, if he’d
be happier with someone else who could give him a baby, if he would ever
consider leaving me.  The stress
and the hormones also made a very different person than the one he
married.  I was nasty and
bitter.  My confidence was gone.  I lost the ability to be light-hearted
about things.  I cried all the
time.  I didn’t want to go out with
friends or do anything because I didn’t want people asking about when we were
going to have babies or surprising me with their “good news.”  I worried that it was just a matter of
time before he got completely sick of the new me and left.  Of course he never gave me any
indication of that, but your mind will convince you of funny things sometimes.

How can you help a friend going through infertility
or loss?
I think one of the hardest things was
other people announcing their pregnancies.  It’s such a joyous occasion for those involved, but to
someone struggling with infertility, a pregnancy announcement is a slap in the
face.  I hated that such wonderful
and joyous news would make me so resentful and angry.  I also hated that I couldn’t be happy for my friends.  As stupid as it sounds, I felt like there
were only a limited number of babies to be given out and every time someone
else got one, it made it less likely that I would get one.  I know that makes no sense, but I
couldn’t help but feel that way.
Every new pregnancy announcement would send me in to a spiral of
depression and anger and despair, accompanied by lots of crying and self-pity.  And don’t even get me started on people
that whine and bitch about gaining weight because they’re pregnant or not
sleeping because they were rocking a newborn all night.  I would have given anything to
be in that situation.
Of course, most people didn’t know I was
going through this and didn’t know that they needed to wear kid-gloves around
me.  Once I started talking about
our infertility issues more openly, my friends responded so sweetly and with so
much compassion and class.  I even had
one friend send me a hand-written letter telling me that she was pregnant, that
she would be announcing the news to everyone else publicly soon, but did not
want it to upset me or take me by surprise so she was sending the letter to my
house, where I could read it in private and react anyway I wanted (away from
others).  She mentioned how happy
they were and that she was praying for me.  It was the kindest gesture I’d ever received.
So, if you have a friend going through
this, please be considerate.  Don’t
complain about pregnancy or your baby.
Don’t make comments like, “You can have my kid.”  That’s not helpful and honestly just
makes you look a bit ungrateful for the beautiful child you’ve been given.  Please don’t ever tell her to “Just
relax and it’ll happen” or some miracle story about someone else you know that
got pregnant after dealing with infertility.  Sometimes those stories just hurt more.  Just tell her you love her, you’re
praying for her and if she ever wants to talk about it you’ll be there to
listen.

Please come back next week for Caroline’s story. 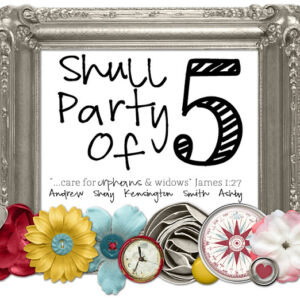 Our Journey to Parenthood…Shay’s Journey