This week is National Infertility Awareness Week. RESOLVE, the national infertility organization is hoisting a blog challenge for the week, with the theme “You Are Not Alone.”

When I came across the RESOLVE site and saw the theme for the week, I knew a post needed to be written.

Those words couldn’t be more true but for someone who is in the thick of infertility, it’s sometimes hard to see.

The main reason I started the blog series, Our Journey to Parenthood was to give women struggling with infertility or loss a place to come and read stories of other women who have been in their shoes. To see women talk openly about their struggle and to find hope. While we all walk different paths in our journey, the feelings that infertility can bring are some we can all relate to.

As women we tend to be go getters. We see something, we go after it and we get it. For me, I was married and wanted to be a mom, so I went after it. But unlike the other goals I set out to achieve, this goal I had was completely out of my control.

When hubs and I first started trying to conceive, I always had a fear in the back of my mind that it wouldn’t be easy. I wanted to be a mom more than anything. I hoped it would just happen within the first few months of us trying. Then, I started to wonder how long it would take to conceive and what was considered “normal.”

Then the negative tests started coming and it felt like they would never stop. Month after month, thoughts and worry began to fill my head. I put an immense amount of pressure on myself.  I spent countless hours researching getting pregnant, I charted, took my temperature, used ovulation kits, you name it.  And month after month, I was overcome with the feeling of defeat and failure. I would wonder if I was the cause of it. I even worried about my worrying. Was worrying about it so much was keeping it from happening? I tried to relax. I tried not to think about it and just let things happen. I tried so hard. It never worked. The thoughts kept consuming me.

It’s a vicious cycle. It’s a lonely time. It’s something way to many of us women go through.

I remember people telling me to relax. Maybe if you just don’t try. Maybe if you take a break for a while. All valid suggestions, but much easier said than done. Especially with Susie next door who coughed and became pregnant. It became hard not to feel jealous of those pregnancy announcements I saw in my FB news feed every day. There were times I even stayed away from FB for that very reason. I even became jealous of the pregnant lady next to me in Target. I didn’t know her. I didn’t know her story or what journey she walked. But I was still jealous. I wanted to be pregnant. I wanted to be shopping for baby clothes. Why couldn’t I be?

Infertility messes with your head.

I remember asking my dr when I could go see a specialist, just because I wanted to find the problem and fix it. She told me I  just needed to wait. It took about thirteen months before we became pregnant for the first time. That baby became my first angel just twelve weeks later. Three months later, I found out I was pregnant again. Seven weeks after that, I had two angels watching over me. A month after that, I found myself sitting at the RE’s office starting with a laundry list of testing. A month after that, I became pregnant again, Avery was born nine months later. Our journey has a happy ending. One that some days seemed impossible to imagine.

One of the main reasons I wasn’t set on trying for a second child last year was because I didn’t want to turn into the women I was when we were trying to get pregnant before. I wrote a post on it last year. I became someone I didn’t like. I lost a bit of who I was while being so consumed with what I wanted. I was afraid I would turn into that person again and didn’t want to put my husband and now daughter through that. God had different plans. Luke was a complete surprise, I got pregnant the week I wrote that post.

Even though it’s been a long time since those dark days, I remember them like they were yesterday. In the beginning of my journey, I didn’t have anyone to talk to. No one could understand what I was going through. It’s one of those things that no matter how hard you try, you don’t really get it unless you’ve experienced it. Thankfully I was able to find a group of women, some friend and others through blogging that became my go to’s for the hard days. That group of women was there when I needed to vent, to cry, to celebrate and for everything in-between.

While not much can help when you’re in the thick of it, talking to someone who gets it can. One in eight women experience infertility. One in four experience miscarriage. It’s time we start the conversation and share our stories. This is not something women have to go through alone. 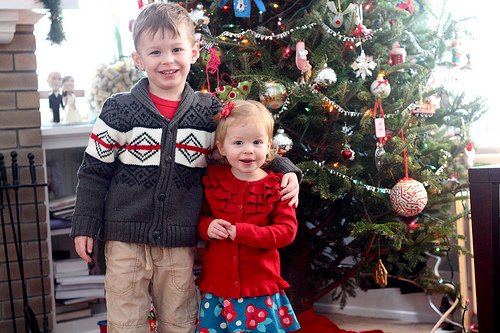